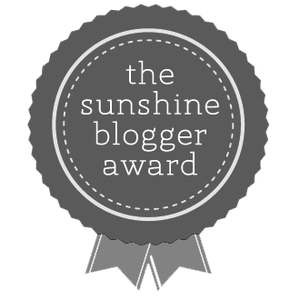 ...also known as my first ever nomination at something blog related!! Ahhhhh. I feel sooooo happy and honoured! I was nominated by the lovely Savannah at The Book Prophet (which is a blog you should most definitely check out because she puts the oo in cool, the ass in kickass and she is rad and writes about a ton of books that I kind of wanna read).

Anyways, sunshine awards. Weeee. Okay, so let's start! (and I hope I will follow all the rules, 'cause this is my first time at this!)


1. If you could go back in time to fix a mistake you've made or to change something, what would it be?

Okay if I could go back in time and change something I probably would have:
a. Studied more for my media planning class because it would probably come in handy right now;
b. Read the book Os Maias when I should have (aka when it was an obligatory reading at school!)
c. Probably would have treated some people better in highschool, because I really liked them.
d. Have signed up for a programming class in uni.


2. If you could pick a place in time to travel to, when and where?

I would go to the court of Louis XIV because I would get to see Versailles being built and would have been able to live there which would probably be pretty ace. Also, cute boys at court. (but honestly, I wouldn't time travel because I love the present).

Invisibility cloak from Harry Potter!!!  I mean.... who wouldn't, honestly? You'd get to see everything and hear every conversation you wanted without people seeing you! It would honestly be so cool, you'd be a little fly on the wall.... just an invisible one at that.


4. Who is your favorite actor/actress?

After much consideration, I'm going with.... Benedict Cumberbatch. Because he is the Cumberbatch and I mean.... I will only really watch Doctor Strange/something comics related because of him and I think that means he is my favorite actor.
Favorite actress.... I don't know. I don't have one.


5. What is your current favorite TV show?

VIKINGS! no,wait... Outlander! Yes, between those two. This one is sooooo hard because I love so many shows and I am so addicted to so many of them . I suppose Vikings is that one show I always have to watch the epi when it comes out and Outlander is the show where I try to not watch the epis until the season ends because I know the hiatus will be too big and I want to watch them closer to the new seasons. So, yeah.

6. Name three fandoms you are a part of.

a. RAFAEL NADAL!!!! The first fandom I was in, where I learned to speak/write english and where I read my first ever fanfics. Oh my, I was only like...13. I'm still part of that fandom because Nadal is a huge part of my life and I love him to bits <3 <3

b. Sherlock!!!! BBC Sherlock is my addiction and I am super part of the fandom even if okay I don't write fics or anything but I adore Sherlock and the actors and I love everyone involved in this fandom and tv show and gaaaaah. Once, I even sent them an email to see if they wanted to collab with a company I was working with and that is the high point of my career.

c. Outlander! I don't consider myself a really active part of this fandom and I can hardly know all the dates and facts and everything that an avid fan should know but I just love this fandom and these books and this serie and these actors. Urgh.

Oliver and Benji from those soccer cartoons, probably, 'cause I watch them a whooooooole lot. Or like... Ash from Pokemon. Just...someone from the cartoons I used to watch as a child.


9. If a zombie apocalypse were to happen, pick your weapon of choice, food of choice, shelter of choice, and fictional character to bring along with you.

DEAN AND SAM, OBVIOUSLY. or if I could only choose one character I'd choose Sam because he was always my favorite brother and I mean... how can anyone choose anybody else? These guys kill demons for a living! Weapon of choice would be... a gun??? A knife??? (how are zombies killed? okay, I'm going with a gun 'cause I can shoot from afar). Food would be just lots of canned food and water and sugar (just in case). The shelter of choice would be a bunker or a boat, because zombies probably can't swim.


10. Most anticipated book release of the year.

Nicholas Sparks' new romance because I am a sucker for Nicholas Sparks stuff and the new Alice Clayton book (named Cream of the Crop).


11. If you could choose one book that you'd be able to adapt into a movie your way, what would it be and who would you cast, where would you shoot, who would write the script, etc?

I would choose Baltasar&Blimunda by José Saramago because it's one of my favorite books EVER. It would be shot here in Portugal, in Mafra because that's where the story takes places.Scott Eastwood would play Baltasar (because hotttttt) and Karla Souza as Blimunda (because I love her so much) and I'd cast Sean Connery as Priest Bartolomeu. I would write the script because it's my favorite book and I'd want to work closely with Scott Eastwood (wink wink).
THE NOMINEES
(I have only know like 2 bloggers and one of them is Savannah so I'mma nominate blogs who I am a fan of, so don't feel obligated to do this!)

Laura at The Sweetest Condition
Danica at  A Redheaded Bookworm
C. at O meu Reino da Noite
Tempo de Ler at Tempo de Ler
Tanya at Girls Plus Books
Everyone at The Broke and the Bookish
And anyone else who wants to do this (just leave me the link bellow!)


1. If you had to put together a perfect book: from which book would you take the plot, the characters, the villains, etc.? (i.e.: plot from Divergent, male character is Peeta from Hunger Games.....)

2. Would you rather read many books a year but them being meeh stories or only reading one book during a year but the story being WOW WOW WOW?

4. If you could choose a fictional character to be your best friend in real life, who would it be and why?

6. What was the irst book you've ever read?

7. If you could be anything you wanted, what would you be?

8. What is your happiest memory?

10. If you could meet anyone, dead or alive, who would it be?

11. Name: your ideal holiday destination, who would go with you and 3 things you would take.


Okayyyy, and that's it! Thank you Savannah for nominating me and I look forward to see everyone doing this award thingie because it was super fun for me (tho I acknowlege I have to start following more blogs!!!)